Earth to Abram by Timothy Lebo 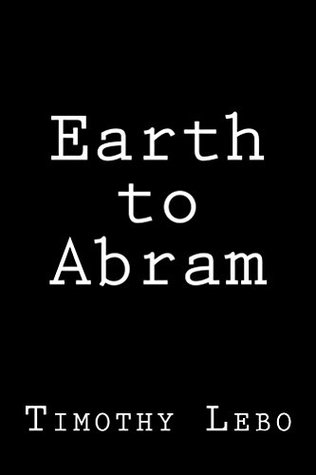 Reading as a young adult novel: 1/5

I received a copy of this in PDF form in exchange for an honest review.

It’s the year 3007. Humans now live on Mars and have, in turn, abandoned the planet Earth. When a recent Shuttle trip to Earth for resources comes back empty, the news spreads to the people that the Earth has officially been depleted. In the midst of all this, there is a twelve-year-old outcast named Abram who dreams of a life of adventure. While stuck in his classroom for an undeserved punishment during recess, he discovers that a self-conscious quirk holds a power that could save the human race. What Abram faces next not only forces him to grow up, but also come to terms with who he really is.

Reading the description, I really wanted to like this book. I love sci-fi and the fact that earth had completely depleted its resources had an apocalyptic feel. But that is not what the book delivered. In the email from the author he states that “the book caters to young teens/teens/young adults.” So naturally I started reading it with the expectation that it would be at the same reading level as other young adult books. This is not the case. The writing is better suited for young children. There are a ton of clichés, idioms, and over used phrases. Nearly every other sentence ended with an exclamation point. The vocabulary used was so simple, and not in a way that suggests a deliberate writing style.

The main character is Abram, who is twelve, so I suppose he should talk and think like a child. However, there are many other books with children as protagonists that are exceedingly well done. Ender’s Game immediately come to mind. Similarly, Ender is a child who has the fate of the human race resting on his shoulders in another sci-fi story. That story was rich and full of through provoking questions. Earth to Abram tried hard to be thought provoking but it fell short.

SPOLIERS. The reason earths resources were depleted was because no one remembered music. What? Abram is the savior because he remembers music and sang to plants in his school classroom and they immediately started growing. So naturally his teacher brings him to the government and sends him to earth to go sing to the rest of the plants. At random points in the book, he is spoken to by a “booming voice” that reminds him of how special he is and also shows him a secret room in his house with a record player in it. How is there a secret room in one of the newest houses that was ramshackly (made that word up) put together that has a record player in it when no one remembers what music is?

The discovery that there were still humans on Earth was introduced suddenly. The introduction of the “bad guy” of another tribe was sudden and the resolution of getting rid of him was sudden. That all happens in about 15 pages. I felt as though everything that happened in this book was just stuck in conveniently to make the next event happen.