Smoke Gets In Your Eyes by Caitlin Doughty 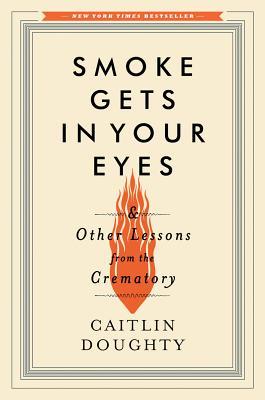 A young mortician goes behind the scenes, unafraid of the gruesome (and fascinating) details of her curious profession.

Most people want to avoid thinking about death, but Caitlin Doughty—a twenty-something with a degree in medieval history and a flair for the macabre—took a job at a crematory, turning morbid curiosity into her life’s work. Thrown into a profession of gallows humor and vivid characters (both living and very dead), Doughty learned to navigate the secretive culture of those who care for the deceased.

Smoke Gets in Your Eyes tells an unusual coming-of-age story full of bizarre encounters and unforgettable scenes. Caring for dead bodies of every color, shape, and affliction, Doughty soon becomes an intrepid explorer in the world of the dead. She describes how she swept ashes from the machines (and sometimes onto her clothes) and reveals the strange history of cremation and undertaking, marveling at bizarre and wonderful funeral practices from different cultures.

Her eye-opening, candid, and often hilarious story is like going on a journey with your bravest friend to the cemetery at midnight. She demystifies death, leading us behind the black curtain of her unique profession. And she answers questions you didn’t know you had: Can you catch a disease from a corpse? How many dead bodies can you fit in a Dodge van? What exactly does a flaming skull look like?

Honest and heartfelt, self-deprecating and ironic, Doughty’s engaging style makes this otherwise taboo topic both approachable and engrossing. Now a licensed mortician with an alternative funeral practice, Doughty argues that our fear of dying warps our culture and society, and she calls for better ways of dealing with death (and our dead).

I usually don’t pick up non-fiction books, but this memoir seemed to good to pass up. I was not disappointed! Caitlin Doughty takes the reader behind the scenes of the death industry in an extremely entertaining and frank manner. Death can be a hard topic for a lot of people, especially what happens to the remains after a person dies. Doughty describes these processes in detail but manages to be hilarious simultaneously. I actually laughed out loud while reading. Her wit and frankness were refreshing for such a topic.

She exposes more of the death industry than is usually known to people. Smoke Gets In Your Eyes was not only hilarious but also extremely informative. I knew very little about cremation or really anything that happens after a body dies. Doughty takes the reader through her daily experiences. From picking up bodies from homes or hospitals, to operating the crematory, to preparing bodies for witness cremations and final visits, to her experiences at mortuary school, Doughty has done a bit of everything. All bodies, all the time.

The memoir was also thought provoking. As this memoir demonstrates, death does not have to be all doom and gloom, but it cannot be all laughs either without losing its meaning. Smoke Gets in Your Eyes makes the reader think about the inevitability of impending death. Consequently, the reader has to think about life as well. Doughty stresses the importance of being informed about the death industry in order to know what you want to be done after you eventually pass. A cremation? A burial? More innovative methods that are being developed? Doughty accomplishes being hilarious yet serious, frank yet sincere.

I loved it! Definitely for anyone with an interest in the macabre. Although, it really is an important read for all people because we are all going to die at some point. From the moment we are born, we are dying. Why not embrace it?