Department 19: Darkest Night by Will Hill 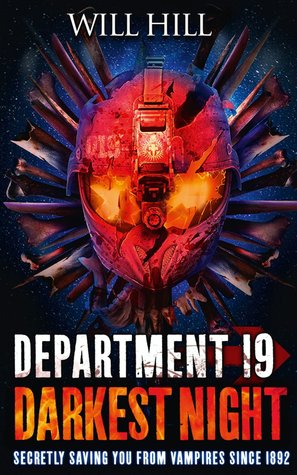 The brave men and women of Department 19 have fought Dracula at every turn, but now Zero Hour has passed and the ancient vampire is at full strength.

Inside Department 19, the Operators are exhausted and fractured. Jamie, Larissa, Matt and Kate are each struggling with their own demons. When the friends need each other most, they are further apart than ever.

Outside the Department, the world reels from the revelation that vampires are real. Violence and paranoia spread around the globe and, when it finally comes, Dracula’s opening move is more vicious than anyone could have imagined.

A final battle looms between the forces of darkness and the last, massed ranks of those who stand against it. A battle that will define the future of humanity. A battle that simply cannot be lost…

I absolutely loved this series and more people need to read it! The amount of research it must take to make a supernatural paramilitary organization fighting the rise of Dracula seem realistic and grounded must have been phenomenal. Hill uses real places, real history, and literature as a structure for the world of Blacklight and Dracula. He expertly combines the Dracula of Bram Stoker with the Dracula of history, the ruthless Vlad Tepes, Prince of Wallachia. Fast paced and emotionally gripping, this finale to the Department 19 series is spectacular.

There are a great deal of view points in this and the other novels but it doesn’t feel like too many. Each characters story is intertwined with the others expertly. I love all the perspectives, particularly of Jamie, the prodigious blacklight operator, Larissa, the reluctant vampire operator, Matt, the genius working toward a vampire cure, and Valentin, the centuries old vampire ally turned enemy of Dracula himself. These four don’t even scratch the surface of the detailed leadership structure of both Blacklight and of Dracula’s legions. Absolutely phenomenal.

Darkest Night is full of conspiracies, secret government agencies, genetic testing, and realistic portrayals of reactions of ordinary citizens to the idea that creatures of nightmares are real. Department 19 is as realistic as a paranormal military can be. Having studied military history extensively, I really enjoyed and appreciated the attention to detail into how military organizations run, how decisions are made, and the tactical and strategic elements applied to a vampire apocalypse.

Darkest Night is the last in the five book series and I am sad to see it go. However, the novel doesn’t reveal all its secrets, even in the end. Hill answers the big questions of the series but still leaves enough open for reader interpretation. It feels as if the characters live on to make new decisions and memories rather than a hard end. I think that is the best way to do these characters I have grown so attached to justice.

One thought on “Department 19: Darkest Night by Will Hill – Review”