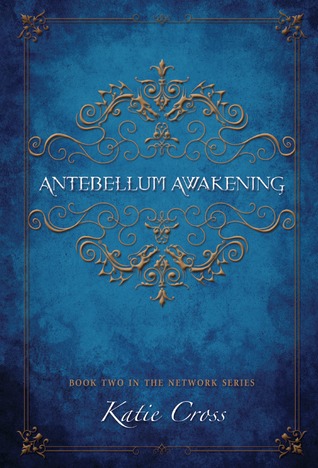 I received a copy of this from the author in exchange for an honest review.

Never underestimate the power of a volatile witch.

Still reeling in the wake of her mother’s death, sixteen-year-old Bianca Monroe is forced to move to Chatham Castle. Not even the sudden appearance of ancient dragons in haunted Letum Wood nor her two best friends can distract her from the strength of her deep, dark rage.

Her grief puts her magical powers into chaos, endangering any witch around her. She has six months left to destroy the curse that will kill her and fulfill her contract with the most cunning enemy of all: her former teacher Miss Mabel.

Bianca must make a choice: learn to control her restless powers, or let the powers control her.

Antebellum Awakening is the second book in the thrilling new fantasy collection The Network Series. It’s a haunting tale about tragedy, loss, and the power of moving on.

YAAS! I love this series so much. I found the first, Miss Mabel’s School for Girls, on NetGalley and I am so glad I did. After posting my praise on this blog and all my other social media platforms, the author offered me a copy of the second novel as well as a novella (see my previous review of The Isadora Interviews) for review. In this second book of the Network series, Bianca moves to the Castle of the High Priestess to learn to control her new power, brought on by the murder of her mother, as well as how to use it to defeat the evil Miss Mabel. Antebellum Awakening reminded me of the Wizard of Oz. There are good and bad witches, they live in cardinal directions, and Miss Mabel is plotting in the west. She is legit the Wicked Witch of the West.

This installment of the Network series also introduced the readers to new creatures and players in the world of Antebellum. Forest dragons make an appearance and there is a new witch in the forest who is related to another previous character. I love that, while the dragons are generally kept in check by this dragon master witch, they are still their own magnificent creatures and do not take kindly to witches. Antebellum Awakening expands on the family backgrounds of many of the players in the upcoming conflict and I was excited to learn more. Especially since some of those familial revelations are going to have dire consequences for the characters!

There were hints of romance but not an overwhelming amount like in many YA books. Camille was thrilled to stay at the castle with Bianca because of the handsome guardians. She spends a good portion of the novel acting as a comic relief mooning over them. There were hints of romance for Bianca, too, but very much less so which I liked. The focus was mainly on family and power and the women of the story. Bianca has to learn to protect herself from Miss Mabel and her own growing power. She has to face her fears and face the loss she has suffered. I am so glad this YA novel is out there to demonstrate the power of women, their friendships, and the struggles they must face.

Absolutely, yes! The ending makes me even more excited for the release of The High Priests Daughter releasing in September. It is going to go down! Thank goodness the prequel, Mildred’s Resistance is going to come out in July! Something to tide me over ♥